Charlotte Hungerford Hospital was built in response to a pandemic

As early as 549 AD, humans recorded and practiced quarantining people with infectious diseases. The word, meaning “forty” in Latin, derives from 1300s Venice where they established the first formal system requiring ships and sailors to lay anchor in the harbor for 40 days to help stem the spread of the Black Death. Over the centuries, people tried everything to escape and control plagues and quarantine has been a steadfast tool. 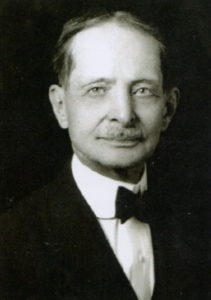 The remoteness of northwest Connecticut did not spare inhabitants from deadly outbreaks of contagious diseases like typhoid, tuberculosis and influenza in the early 20th century. Modes of transmission were not well understood and cures not readily available. According to the Centers for Disease Control, continued outbreaks of yellow fever finally prompted Congress to pass federal quarantine legislation in 1878. State and local governments made sporadic attempts to impose quarantine requirements, but were the decisionmakers when it came to how their communities dealt with public safety.

In the early 1900s in Litchfield County, Dr. Elias Pratt (left) was Torrington’s health officer and school physician and went on to become Charlotte Hungerford Hospital’s first medical staff president. As the local health expert and authority, it was his decision to close local theaters, schools and churches, and cancel parades, funerals and sporting events during outbreaks such as the Typhoid Fever outbreak of 1911. Wearing muslin or gauze masks in public was also encouraged, although it’s hard to believe a gauze mask offered any protection.

Torrington officials and medical professionals also directed isolation of anyone infected with communicable diseases in church basements and high schools as needed. Their goal was to care for patients somewhere away from others to stop disease spread. Even early hospital leaders feared bringing viruses into their facilities.

Records show that when Charlotte Hungerford opened to the public in 1916, its rules and regulations stated that no patient having a contagious disease would be admitted. Fear of infection spreading through large open wards was a real concern, even though the hospital featured more private rooms with silver tea service, oak beds and personal nurses. Unfortunately, these accommodations were not affordable to most at the hefty cost of $6 a day.

By 1918, the “Spanish Flu” pandemic had spread worldwide, infecting about 500 million and claiming 9,000 lives over three waves.

In Torrington, more than 3,400 contracted the disease and more than 80 died, evidence that simple curtains between hospital beds was an inadequate form of infection control.

Luckily, a year before, two insightful sisters, Ella Coe and Adelaide Godfrey of Litchfield announced plans to build an isolation hospital in memory of their brother, Edward Turner Coe. They opted to donate the money to build at Charlotte Hungerford Hospital rather than build a separate facility. In 1920, the Edward T. Coe Memorial isolation unit building began admitting patients and the northwest region had a state-of-the-art building for such specialized care. The new rooms did not feature today’s regulated air pressure and filters, but it was start!

Patient privacy: Then and now During America’s Typhoid Fever epidemic of 1911, newspapers not only reported numbers of new cases but also the names and addresses of those afflicted.

In the Torrington Register, under the headline “Typhoid News,” one could see names with phrases such as “reported today to be ill with Typhoid Fever” or “considerable improvement is reported in the condition of…” This was, in part, out of necessity as many did not have telephones. Newspapers were the only source of information besides conversation. This was allowed because there were no HIPAA Privacy Rules or established national standards to protect individuals’ medical records and other personal health information. Anyone’s illness was basically everyone’s business. How times have changed!