Officer’s motto: ‘Be the light in a bad situation’ 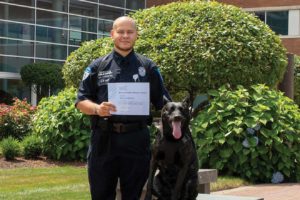 A family in the MidState Medical Center Emergency Room was having a very bad day when Public Safety Officer Juan Casanova and his canine partner, Alaska, paid them a visit.

For the family, who wound up at MidState after a serious collision that destroyed their car, kindness and a little puppy love turned out to be the best medicine.

Casanova, who goes by John, overheard technicians talking about a little boy whose sneakers had gotten lost between a crash on the highway and arrival at the hospital. Neither the boy nor his parents were seriously injured, but he had no shoes.

One techs had a son about the same age, so Casanova asked her to estimate the patient’s shoe size. During his break, he dashed to a nearby mall and picked out a pair of red, white and blue Under Armour sneakers.

Casanova, an Air Force veteran, is also the hospital’s canine officer with his Dutch Shepherd, Alaska, who knows many commands, including carrying packages using her mouth. Casanova asked her to hold the bag of sneakers while he gently knocked on the exam room door.

“I said I heard they were having a rough day and my canine Alaska has a surprise for you,’’ he said. “I said if they’re the wrong size, I can run across the street and exchange them.’’

The family was delighted. The sneakers fit perfectly, and unknown to Casanova, were the colors of the boy’s favorite hockey team, the New York Rangers.

A few weeks later, a note arrived from the family, who live on Long Island.

“There are not enough words to express our gratitude for your kind gesture. You truly made things better during an extremely stressful day,’’ the boy’s mother wrote.

Casanova, who lives in Southington, said he and his wife are deeply religious and helping those in need is part of their everyday life.

“We try to be the light in bad situations,’’ he said.

At Hartford HealthCare, we call that making every moment matter.

“You would think that when we come together like this it is very sad, but honestly, it’s a celebration where we remember their lives, we remember cherished memories, we have the ability to say their name out loud again, so really, although it is sad, it is also very joyous.”

Those were the words of Laurie St. John, vice president of Hartford HealthCare at Home (HHCAH), as she began a virtual memorial service created as a way to offer support to the patients and families of the HHCAH hospice program who lost loved ones during the COVID-19 pandemic.

“These are families who were not able to be with their loved ones when they died because of the restrictions surrounding COVID and, in most cases, they were not even able to have burial or memorial services either,” explained Ann Olson, vice president of hospice services for HHCAH. “I am so humbled and proud of the team effort that has enabled this beautiful, meaningful and touching celebration of life for our hospice families.”

Filmed at St. Elizabeth Seton Church in Rocky Hill, the service includes presentations and readings from HHCAH leadership and hospice team members as well as music from Cecilia Burns, HHCAH’s music therapist. All are non-denominational and without religious imagery to make the service inclusive.

The hospice team reached out to the more than 600 families to invite them to view the service, which was presented on the HHCAH website May 30. More than 300 families joined that day and the video remains online for anyone to see.

“The service was beautiful and moving,” a family member said. “Thank you for planning it and taking the time to share your thoughts and feelings. It has been so very difficult to lose a loved one and be unable to honor them with family and friends gathered together. This service was a touching farewell and meant so much to me and my family.”

View the Service at HartfordhealthCareatHome.org

Surrogacy story: A labor of love

A Hartford Hospital labor and delivery nurse, Izabella “Izzy” Sierra participates in countless birthing experiences and has interacted with surrogates, women bearing children for someone else.

These experiences left quite an impression on Sierra, who has two children of her own, and, in 2018, she started the process to be a surrogate. Working with an agency, she was interviewed, tested and ultimately matched with Raz and Hana, a couple with a young son in New York City.

In August 2019, after an unsuccessful transfer effort and loss of embryos, one embryo remained. It was the smallest of the group and everyone knew the odds were against them. The transfer occurred, but the couple and Sierra were very cautious about getting their hopes up.

Ten days later, their prayers were answered in the form of a positive pregnancy test. Several days after that, at her first ultrasound, Sierra had the biggest surprise of all when there were two heartbeats! “It was completely quiet in the exam room,” she recalled. “We were shocked. There was a two percent chance this could happen. The embryo split.” For Hana and Raz, the revelation was overwhelming. 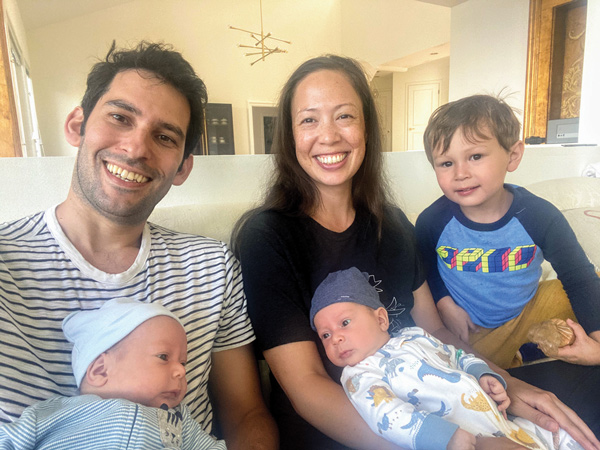 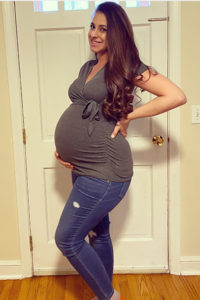 “We had all but given up hope of having another child, so the thought of identical twins was beyond words for both of us,” Hana shared.

Throughout the pregnancy, Sierra developed a close relationship with the couple, who attended exams and shed tears when the sound of two strong heartbeats filled the room. Sierra was the guest of honor at the baby shower, meeting the couple’s extended family and son, Orin. Every week, a shipment of fruit corresponding with the gestational age and size of the babies arrived from the couple.

“Izabella dedicated herself and her family to changing our lives and bringing us Arlin and Zahavi. The joy and gratitude we feel every day is immeasurable and overwhelming,” Hana said. “We can’t thank her enough and she will always be in our hearts as we raise our three boys to be happy, healthy, good human beings.” So inspired by Sierra’s selflessness, the couple created a fund in her honor to help people who could not otherwise afford to grow their families through surrogacy.

Sierra is sometimes asked about her emotional state and connection to the babies she helped bring into the world. Completely grounded, she knew her sole purpose was to carry them to term for Raz and Hana, not to become emotionally attached. “I always think back to that little embryo and now they are chubby, healthy baby boys. I helped that embryo turn into two beautiful little boys.” Donations to “Izabella’s Fund” can be made by visiting the Family Equality Council.

We made every moment matter when it mattered most

During the COVID-19 crisis, Hartford HealthCare’s clinical teams provided not only the highest quality medical care, but a level of compassionate care that exceeded patient expectations. In May, HHC’s patient experience scores, measured through post-visit surveys, were the highest recorded since October 2019.

Patients told us we made every moment matter when it mattered most. Here’s a sample of their comments:

“Hartford Hospital managed to get me in
and out same day for this life-saving procedure during coronavirus. Wonderful execution in the midst of a terrible global crisis.”

“I was very nervous about having my procedure during this pandemic, and I was quickly put at ease by the staff at MidState from the nurse checking my temp at the door to the time I left. Thank you!”

“Due to the infectious nature of my illness, I had no visitors. However, I felt as if the compassion and empathy of the nursing staff came as close to actually having my own family there. They were truly exceptional in the level of compassion they showed me.”

“Every single person I spoke to before and during my appointment was extremely kind, professional and respectful, which put me at ease as a woman who gets very anxious for a medical appointment of any kind. I think, especially right now during such uncertain times, the medical staff I interacted with deserves gratitude and admiration for their bravery day after day and compassion for risking their lives for us.”

“Staff was great! They were very friendly and paid attention to me. They also explained things clearly to me and made me feel comfortable even though my mother couldn’t go in with me. Best hospital ever…and great staff.”

“Overall, a very pleasant experience under the circumstances. I expected a much longer wait due to the COVID-19 pandemic, but was treated very quickly and didn’t wait long at all between procedures. Ultrasound and x-ray techs where both professional with a little bit of humor to make the procedures more comfortable.”

“Prior to the pandemic, the facility was always maintained at a high standard. Since the pandemic, sanitation has increased. Gym is always spotless. I’ve felt safe and comfortable continuing therapy during this pandemic.”

“Everyone was so great about staying safe. The safety of the patient was notable and appreciated in these scary times.”

“With the scare of COVID-19, I was beyond impressed with how quick and efficient everyone was.”

Every day, our team does amazing things to benefit patients and the community. Email us your moments that matter.