As if struggling with chronic medical illness is not challenging enough for young adults, research shows they are also far more likely to develop mental illness than those not facing physical challenges or limitations.

“This aligns perfectly with what we’ve been seeing in our work with youths,” said Dr. David Bendor, clinical coordinator of the new Young Adult Medical Track at Hartford HealthCare’s Institute of Living. “Significant medical conditions often cause mental health challenges for these young people and, sadly, the effect of not addressing mental health issues is that it becomes more challenging for young adults to ensure that their medical needs are met. They may skip medications or medical appointments, or take other risks with their health.”

At the Young Adult Medical Track, the team — two psychologists, a psychiatrist and a nurse — work collaboratively with the young adults and their primary care, subspecialty and mental health providers to integrate care and support for both the body and mind.

The program combines individual, group and family therapy with medication management. Participants interact with peers facing similar struggles to explore the losses or limitations posed by their medical conditions while navigating the transition to adult roles. They attend three groups a day, three days a week for six to eight weeks.

Visit instituteofliving.org/youngadultmedical for more information on the program.

The Hartford HealthCare Behavioral Health Network (BHN) celebrated its first-ever Recovery Leadership Academy graduation in October at the Institute of Living in Hartford.

Recovery Leadership Academy — an 80-hour training — prepares people in recovery from mental illness and addiction to become certified recovery support specialists. These specialists draw on personal experience to provide support to those currently in treatment.

I’ve seen it over and over, and now research is proving it works as well,” said Pat Rehmer, president of the BHN. “People can and do recover, and people who are in recovery can help.” 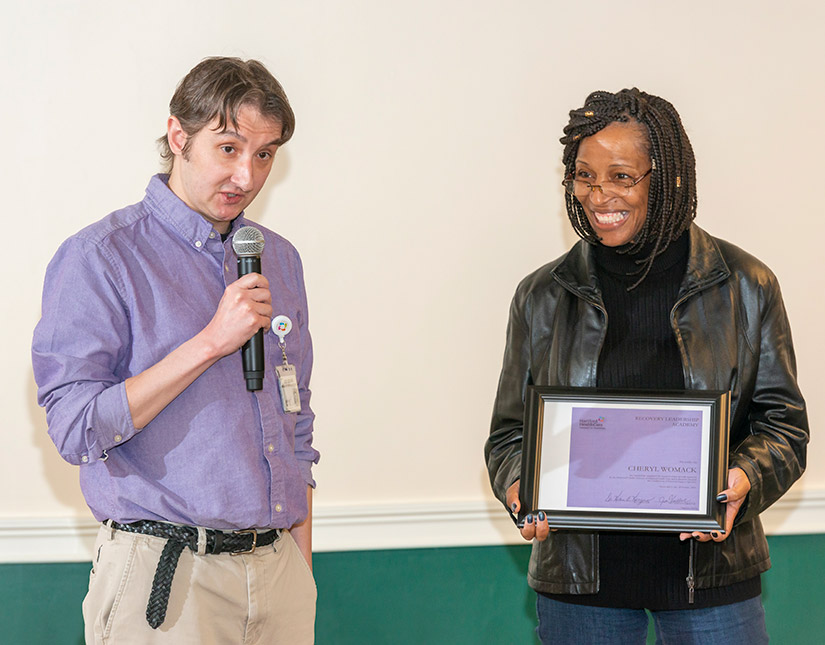 A Hartford man had reason to celebrate after leaving Hartford Hospital in late summer. According to CT Lottery, Justin Rodriguez won $15,508 playing the Play4Day game with a lottery ticket purchased in the Auxiliary Store. It wasn’t the first time a big payday originated at the shop. Last year, a lotto player won $10,000 there.

Patient ‘lucky to be alive’

After 40 years of often heavy drinking, Keith Bunnell was diagnosed with pancreatitis and told if he didn’t stop he’d be dead in six months. He quit for a week.

Four months later, the electrical designer and father of four had a worse bout of pancreatitis. He spent four months hospitalized after three surgeries and a LIFE STAR flight to Hartford Hospital. Then, at home, he had a heart attack. 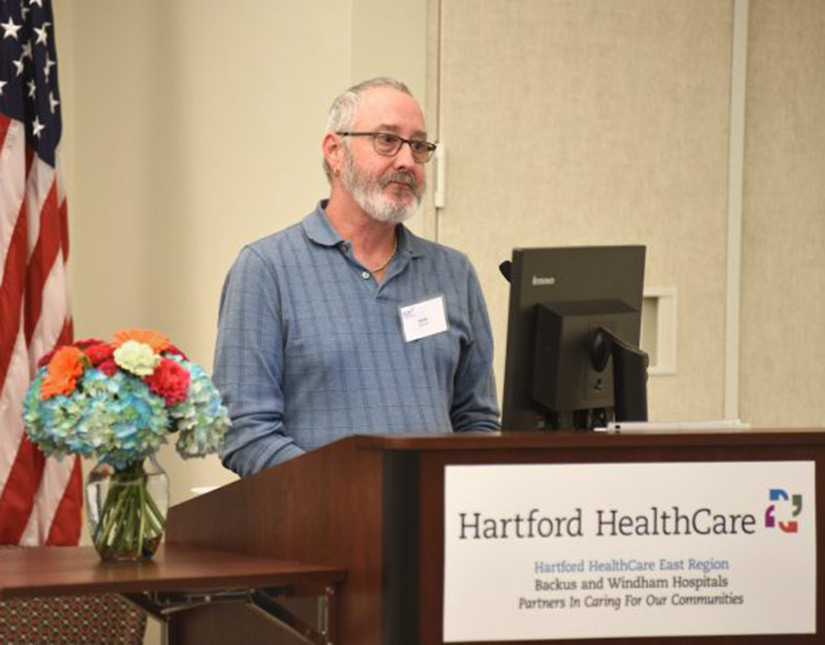 “None of this was enough to stop me from drinking,” said Bunnell, speaker at Natchaug Hospital’s annual reception. “This disease is horrible.”

On the last of six trips to the Backus emergency department, staff said, “We can’t help you anymore. Only you can help yourself.” A Natchaug recovery support specialist in the ED vowed to get him into a substance abuse program. The next day, he got a call from Rushford in Middletown asking if he could be there at 9 a.m. — the time he’d usually be at the package store as it opened.

Something clicked, though. He spent five days in Rushford detox, 21 days in its residential facility and more in Natchaug’s CarePlus intensive outpatient program, where he learned coping skills for recovery.

There’s no more deceiving his colleagues, family or himself. He is honest about his disease and feels healthier than he has in years.

“They kept telling me I could make it. I finally began to believe that,” he said. “I am lucky to be alive.”

More than 75 community members, officials and Hartford HealthCare leaders braved the rain for a beam signing event at the site of the future Mystic HealthCenter.

The 47,000-square-foot development off I-95 and Coogan Boulevard in the Mystic section of Stonington is scheduled to open in winter 2020 and will include: 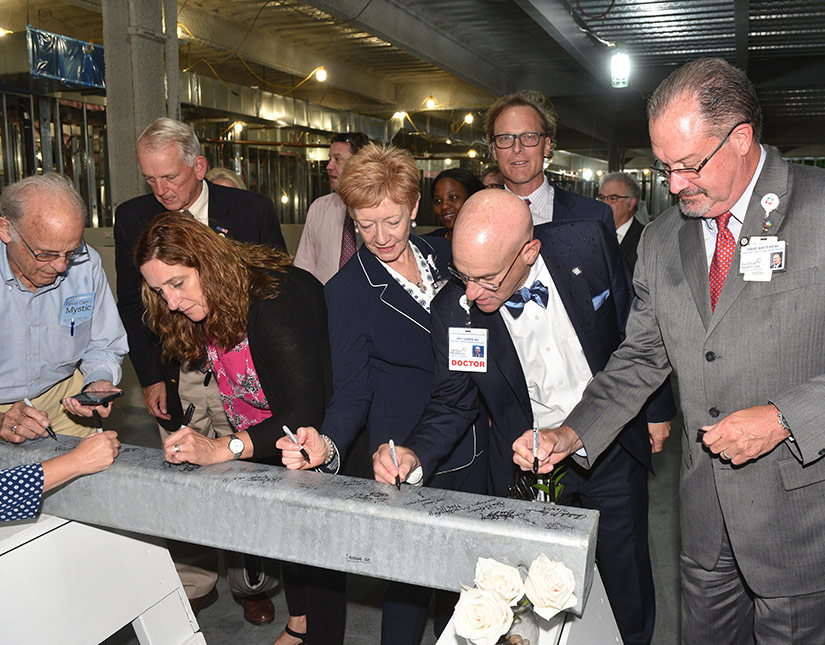 Officials sign a steel beam that is part of the new Mystic facility.
Photos by Jeff Evans

The new reality for less pain

In two weekly treatments lasting about 20 minutes each, patient Christine Chiappone dons a VR headset in an exam room outfitted with computer hardware and sensors. As a result, pain she reported at 8 to 10 dropped to 2 or 3 and she could be more active.

“I have pain-free days now,” she says. Dr. Hamburger, who will see patients in the new Mystic HealthCenter set to open in 2020, is one of only a few doctors on the East Coast using VR as a regular treatment method for pain management.

To read more, visit healthnewshub.org and see the virtual reality goggles in action at hartfordhealthcare.org/goggles 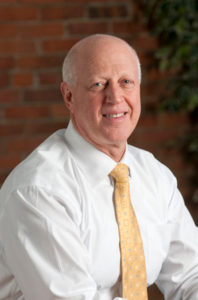 As Charlotte Hungerford Hospital president, Dan McIntyre comes in contact with patients regularly, but never like the morning of October 22.

On the way to work, McIntyre came upon a car crash on Route 44 in New Hartford where a vehicle had flipped on its side with a woman trapped inside. With an unidentified good Samaritan, he pulled her out of the wreckage.

“He’s an angel,” said the driver, Trish Hill, who said she lost control of her vehicle when another car veered into her lane.

The fact that McIntyre took a different route to work that morning made the rescue even more miraculous. He credited his career and life experiences with enabling him to be there for people when they need it.

“I can’t thank them enough,” said Hill, who was banged up but otherwise OK.