Need to Polish Your Public Speaking? Join the Club

What’s your biggest fear? According to the National Institute of Mental Health, nearly 75 percent of Americans are afraid of public speaking, more than those fearing death, heights or spiders. Interesting, right?

In June 2019, the Central Region started offering colleagues a chance to overcome public speaking anxiety and enhance their leadership skills within The Hospital of Central Connecticut and MidState Medical Center, all thanks to Toastmasters International.

The non-profit organization, around since 1924, helps people become more confident in their speaking ability and communication. There are more than 16,000 individual clubs across the globe — including the Central Region chapter, the only one within Hartford HealthCare.

“When you officially become a member of Toastmasters, you’re put on a pathway based on what you want to achieve and what it will take to get you to that point,” said Laura Prior, MSN, APRN, manager of radiology nursing and advanced practitioners with Midstate Radiology Associates, who joined the Toastmasters Club after it started. “I knew I was on a path to leadership, so I wanted to be able to master the skill of public speaking.”

The Central Region Toastmasters Club meets twice monthly and members are tasked with giving pre-planned and timed speeches, doing improv on random topics, and getting feedback to enhance their abilities. That includes a grammarian who points out the number of filler words — “uh” or “um” — used. 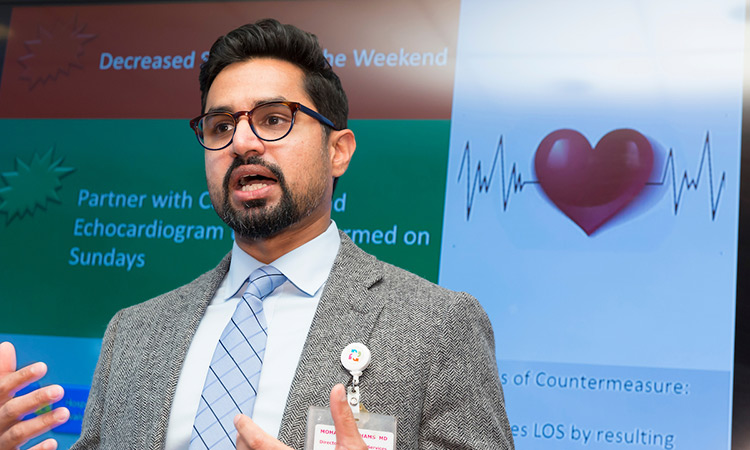 Dr. Mohammed Shams, chief of medicine in the Central Region, sought help speaking for presentations he must deliver.

Dr. Mohammed Shams, Central Region chief of medicine, is part of the club and reported seeing tremendous improvement in his speaking abilities.

“We all have the same goal of becoming better communicators.”

“I can engage my audience and my colleagues in a way I wasn’t able to before through public speaking,” Dr. Shams said. “I can also articulate my thoughts without having to rush and speak with purpose.”

“We get to know each other and there’s so much camaraderie and support to make sure each person in the group feels respected and confident,” Weiland said. “We all have the same goal of becoming better communicators.”

Anyone interested in joining the Central Region club can reach out to amina.weiland@hhchealth.org. 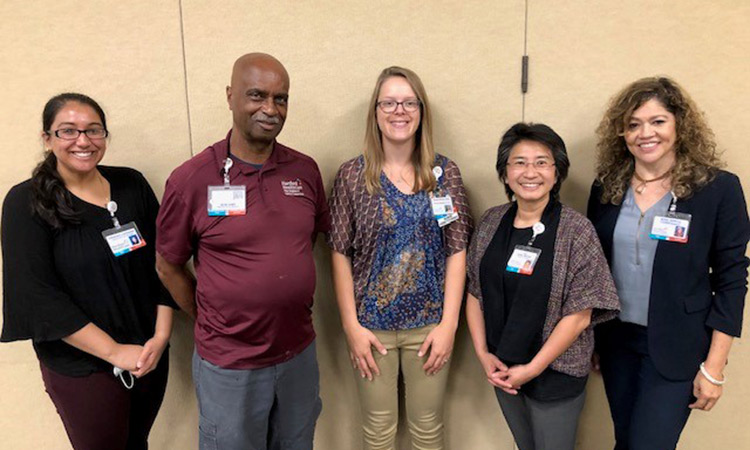 Other Members of the group, from left to right, include: Hima Katrapati, Robert Sims, Laura Prior, Amina Weiland and Mona Heredia. 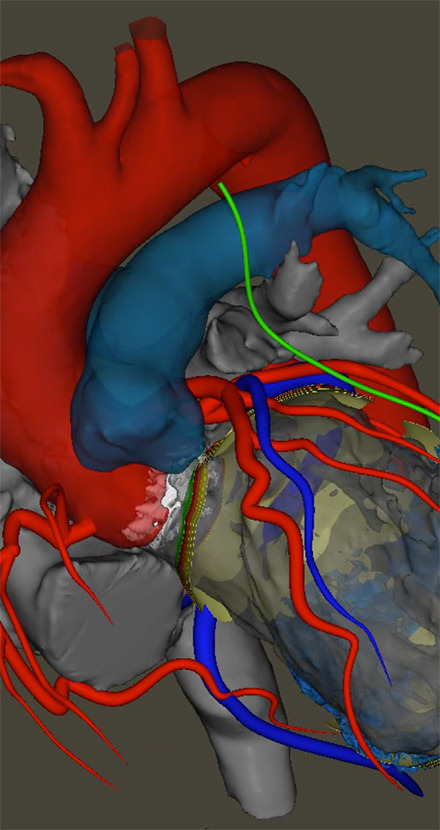 One Beat Ahead with Cardiac First

Fifty-year-old John Aston’s prosthetic aortic valve made the standard ablation procedure he needed to ease a blockage too risky, so, in July, Dr. Aneesh Tolat became the first in the nation to use new technology called inHEART to help.

Dr. Tolat, a cardiac electrophysiologist and director of ventricular tachycardia (VT) ablation at the Hartford HealthCare Heart & Vascular Institute, used the inHEART technology to generate a 3D map that guided placement of the catheter in the patient’s heart.

Aston had undergone aortic valve replacement in January, complicating his more recent need for the VT ablation. The procedure uses cold or heat energy to create tiny scars in the heart to block abnormal signals causing rapid, erratic heartbeat. VT occurs when the heart’s electrical signals cause the lower heart chambers (ventricles) to beat too quickly.

Having the 3D map as a guide for inserting the catheter into Aston’s left ventricle made the procedure safer, more efficient and quicker, Dr. Tolat said. “The inHEART scan gave us a vast amount of information we wouldn’t have otherwise had,” he explained. “By combining the scan with our real-time mapping (during the procedure), we were able to see the areas we knew we needed to stay away from much more clearly.”

Cardiac CT scans taken during the procedure are sent via the cloud to inHEART to be processed by trained case analysts using proprietary technology. inHEART was approved by the Food and Drug Administration in 2021 for commercial use. Dr. Tolat was the first physician to use it outside a research environment.

“For patients with diseased hearts, this will likely become the standard practice prior to their having a VT or PVC (premature ventricular contraction) ablation,” he said. “Having this technology puts Hartford HealthCare at the forefront for patients needing these procedures.”

The mission of the SVS VQI is to improve patient safety and the quality of vascular care delivery by providing web-based collection, aggregation and analysis of clinical data for all patients undergoing specific treatments. The participation awards program encourages active participation in the 12 registries.

Participating centers can earn up to three stars for actions leading to better patient care, including:

“Our team is dedicated to providing exceptional care to patients. We use VQI data to measure the effectiveness of our programs and improve our long-term patient care,” said Dr. Akhilesh Jain, Hartford Hospital’s director of vascular and endovascular surgery.

Biannual regional meetings allow physicians, nurses, data managers, quality officers and others to meet, share information and ideas, and learn from each other. Members use VQI data to significantly improve the delivery of vascular care locally, regionally and nationally, reducing complications and expenses.

Putting the Brakes on Impaired Driving

A new campaign, funded in part by a $550,000 Connecticut Department of Transportation highway safety grant to Hartford Hospital, brings a plea from state trauma centers to people debating whether to have “just one more” and drive impaired. Not One More is part of a campaign that incorporates ads on local television, streaming audio, billboards, social media and the web to prevent the incidence of impaired driving due to alcohol and drugs. The message Not One More highlights the potential domino effect of impaired driving. In a powerful video, viewers are transported from a restaurant to a busy emergency room and then an operating room as teams fight to save the life of someone who chose to get behind the wheel impaired.

“My colleagues and I see the devastating effects of impaired driving every day,” said Dr. Jonathan Gates, chief of trauma at Hartford Hospital. “Not only does driving under the influence of alcohol and drugs cause tremendous physical harm to those involved in impaired driving accidents, the emotional impact of these tragedies ripples throughout our communities.” As part of the Not One More campaign, Connecticut drivers are encouraged to sign an online pledge that they will not drive impaired. The campaign website includes personal stories of healthcare heroes and their experiences treating victims of impaired driving, resources such as a blood alcohol content calculator, information on substance abuse support and related community programs and events.

Gabriel Pujols would have turned 36 on July 23, celebrating with his wife Heidy and 1-year-old son Gabriel Jr. Unfortunately, he passed away unexpectedly in February at Backus Hospital.

Instead of cake and ice cream, his family gathered on his birthday to raise a “Donate Life” flag in honor of Gabriel’s decision to be an organ donor. When he died, his heart was implanted in a 60-year-old man in cardiac failure, saving his life. “This is the very first flag-raising we have had at Backus,” said Donna Handley, hospital president. “In raising this flag, the Pujols family will start a tradition for all those who give life to others in the future. Please know we grieve with you and we celebrate Gabriel’s life today.”

Attending the ceremony — in both English and Spanish — were Gabriel’s widow, his son and stepdaughter, brother and cousin, as well as Backus colleagues and representatives of New England Donor Services (NEDS). “This was something pretty special to have on his birthday, to be able to remember him,” a tearful Heidy said.

Heather Harris, NEDS hospital relations coordinator, said Backus typically sees one organ donation a year. By July 2021, she said there were four. Raising a “Donate Life” flag is always offered to a family, and this was the first time it was done at Backus.

Harris read in English, and Ingrid Palacios, NEDS multicultural community program manager, read in Spanish a poem called “My Final Gift.” Hospital Chaplain Mary Horan gathered the family in front of the flag pole to hold hands and share a prayer of gratitude, for both Gabriel’s life, and his gift of life in death. The flag, emblazoned with the phrase Done Vida (Donate Life), was then raised. “His heart is beating in someone else’s chest,” Gabriel’s brother Marco said. “That is an amazing thing.” 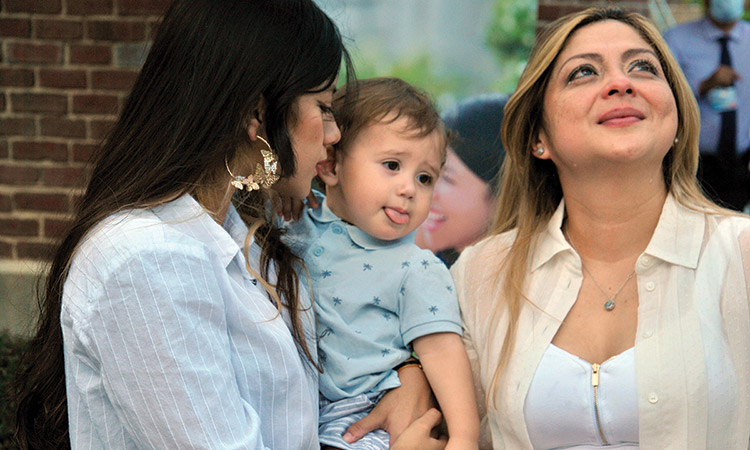 The family of Gabriel Pujols watch as Backus Hospital staffl raised a Donate Life flag honoring his decision to donate organs after his death earlier in 2021. 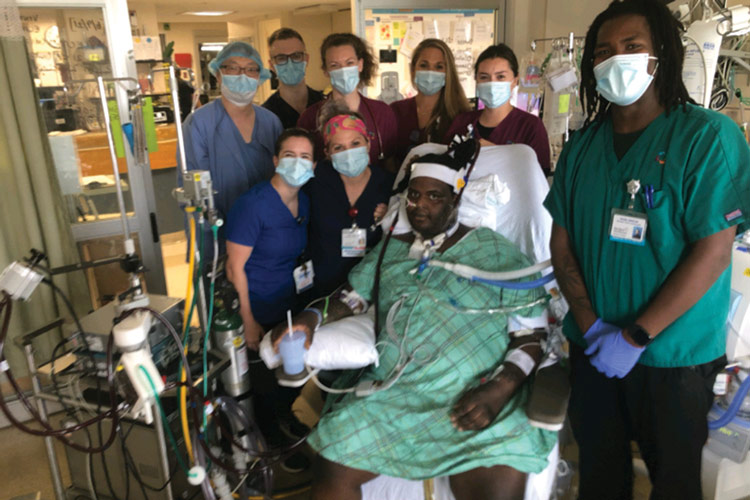 The COVID-19 pandemic challenged the respiratory systems of millions of Americans, including a 27-year-old who came into Hartford Hospital with the potentially lethal virus, pulmonary nodular amyloidosis and Acute Respiratory Distress Syndrome (ARDS). The man struggled to breathe and caregivers eventually placed him on extracorporeal membrane oxygenation (ECMO) equipment, which provided cardiac and respiratory support that allowed his body to rest. While hospitalized, the man also received care from the Hartford Hospital Acute Care Rehabilitation Department. Eventually, the team was celebrated as the first in Connecticut to mobilize a patient on ECMO out of bed. With their help, he was later successfully weaned from ECMO support and transitioned to a rehabilitation hospital to continue his recovery. —-Ken Harrison

Photo: Members of the care team, from left, Natalie Goldberg, Madelyn Filomeno, Addison Koehler, Amy Mecham and Crystal Bellemere surround a patient as he was released from Hartford Hospital for continued care in a rehabilitation facility.