Perspective on a Pandemic

Perspective on a pandemic

Rabbi Philip Lazowski survived the Holocaust, giving him a unique perspective on the recent pandemic.

During the pandemic, many struggled to understand the sickness and upheaval of everyday life that it caused. In search of perspective, I turned to Rabbi Philip Lazowski, Hartford Hospital’s retired chaplain.

A survivor of the Holocaust, Lazowski is uniquely qualified to offer clarity after enduring unthinkable adversity, seeing the worst of humankind and emerging to live a meaningful life with wisdom and grace. His story delivers a message of hope and determination.

Born in Poland, Lazowski was the eldest of five. Life was comfortable until the onset of World War II in 1939 when Poland was divided between Russian and Germany and his beloved village was ravaged by war.

“1941 brought fierce fighting between Germany and Russia. In a search for Russians, the Germans burned our house to the ground,” Lazowski recalled. “They took all our things of value. If we didn’t comply, we would be shot.”

The family fled and the 11-year-old’s life changed forever. Violence, fire and cold-blooded executions permeated his life. Once, Lazowski became separated from his family and faced sure death. In a gathering of Jews, lined up to live or die, he needed to find someone to “adopt” him to be spared.

“I noticed a woman with two little girls.
She had a nurse certificate [for work] and I approached her. She complied, saying, ‘Well, maybe they’ll let me in with three children,’” he related of the woman — he later learned her name was Miriam Rabinowitz — who saved his life.

Lazowski’s mother, sister and two young brothers didn’t escape. He, his father and another brother survived by living in the woods for two and a half years until the Russians liberated them in 1944.

After the war, family in America brought them over. Lazowski was 17. A random conversation led him to reconnect with Rabinowitz, who was living in Hartford.

Soon after, Lazowski and her daughter, Ruth, fell in love, marking the beginning of a marriage that endures to this day.

With such a personal history, Lazowski offers a unique viewpoint on the pandemic. While noting there is no comparison between the Holocaust and the pandemic, he said lessons from one can teach us about the other. He feels little sympathy for those inconvenienced by mask wearing or limited activities.

“People have to get used to a different kind of life. I lived in the woods without food,” he shared. “I had to go to a village to beg for food. Big deal — you have to eat at home.”

If he were still sermonizing at synagogue, he said his message would be unifying.

“Life is indeed a journey. Some moments are sublime and some are excruciating.” 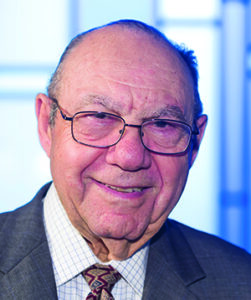