All in the Family

Many refer to their units, departments or hospital as “one big family.” Maybe it’s because we spend so much time together, or because some invite relatives to apply because it’s a great place to work. This section is about those connections. We want to hear your story. Email: susan.mcdonald@hhchealth.org.

Last summer, when a fierce tropical storm destroyed a famed pecan tree on the grounds of the Institute of Living (IOL), Theresa Buss, the Hartford HealthCare vice president, employee benefits and services, called her dad.

Bill Buss, who retired in 2010 after a 35-year career in patient care at the IOL, is a master woodworker who’d already given new life to several of the institute’s venerable trees that fell victim to lightning, wind or old age.

A black walnut coffee table gracing the living room of his Somers home was hewn from a tree cut down in 1980, after a doctor heard it creaking and feared it would fall in a storm. An Adirondack bench on the 35-acre campus was created by Buss from a fallen maple.

The IOL grounds are shaded by rare or unusually large tree species, many dating to the 1860s, when the grounds were re-designed by noted landscape architect Frederick Law Olmsted. Olmsted is famous for helping design New York’s Central Park, the Boston park system and U.S. Capitol grounds in Washington, D.C..

While Buss credited Annetta Caplinger, IOL vice president, clinical operations, with the idea of preserving the legacy of the trees, he added that his ideas are a bit more ambitious than hers.

His plan for the pecan: A Butler’s Tray table he hopes will be displayed in an IOL building.

Last summer, Buss drove his pickup to Hartford and retrieved five huge logs cut by grounds crews after the pecan fell. The wood spent the winter drying in his basement workshop before it was ready to be cut and planed into pieces for the table.

Pecan trees are rare in New England, because few are hardy enough to survive the brutal winters. Buss said it’s the hardest wood he’s ever worked with. Even unfinished, its color is striking, almost white with small dark knots creating a speckled appearance, and he plans to use clear stain to bring out the natural beauty.

To Caplinger, the old pecan tree was a symbol of resilience. Not only did the southern beauty survive for almost 200 years, its trunk was split by a lightning strike years ago, and yet it endured. The new table will be “such a great tribute,” she said.

As a surprise, Buss saved a few round chunks of the pecan to turn into salad bowls for Caplinger, and carved salad servers to go with them.

A perennial jokester, Buss also has a gag planned for the table presentation. On top, he’ll rest a carved ashtray and a realistic-looking carved cigar butt as reference to the days when he was a smoker working in patient care and Caplinger had to enforce hospital smoking regulations. 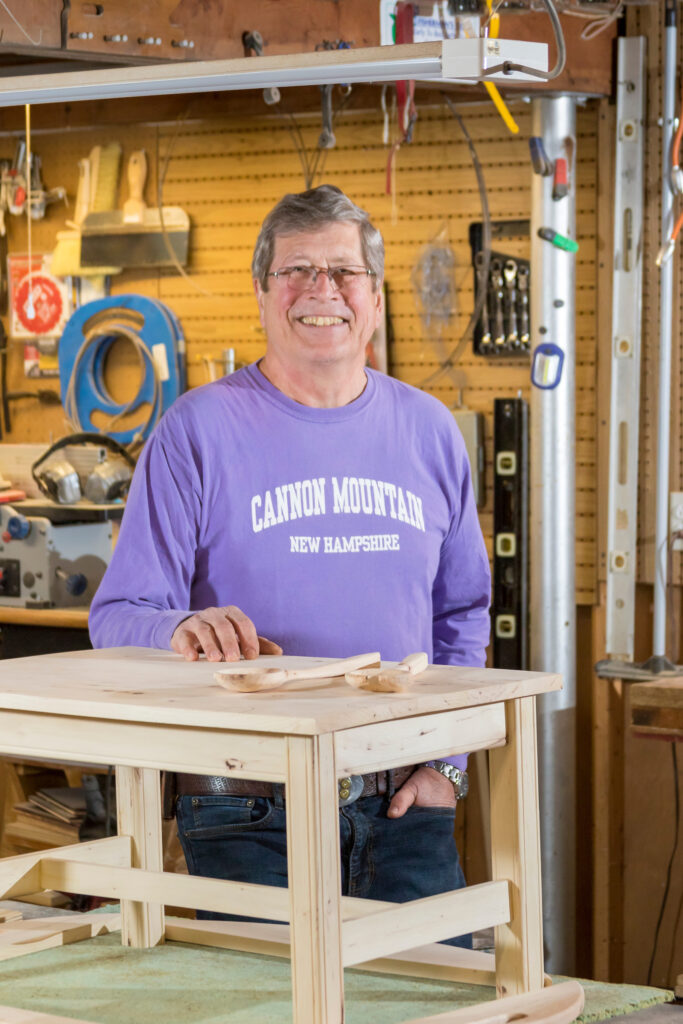 William Buss, retired IOL employee, stands in his home workshop with a table he’s crafting from a Pecan tree that fell on the IOL grounds in a storm.

William Buss (center) with his wife Stasia (right) and daughter Theresa “T” (left). All have worked with Hartford HealthCare.

You could say Theresa “T” Buss was born into Hartford HealthCare.

Her father, Bill, signed on as an Institute of Living (IOL) patient care technician after graduating from the University of Connecticut with a science degree. It was the mid-1970s and the economy was terrible. With few options, he figured he’d stay at the IOL until something better came along. He retired 35 years later, after a varied career in mental healthcare.

At UConn, Bill met Stasia, who lived in the same quadrangle. They went on a date and knew it was meant to be. After graduation, Stasia got a job in Hartford Hospital’s labs, where she spent 30 years in microbiology and 10 in transplant immunology, retiring in 2012. Her 40-year commemorative chair has a place of honor in the couple’s living room.

Their eldest daughter, T, graduated from UConn with a history degree and started in human resources at Backus Hospital which, at the time, was not affiliated with HHC.

Fate intervened and, when HHC added Backus to the system in 2013, she became part of the family tradition.

For the past seven years, T has been responsible for employee benefits and services, including payroll and timekeeping. She leads a team that designs and administers benefits for more than 27,000 colleagues and another 7,000 members of our workforce. T credits her parents for her success and that of two younger siblings.

“I am not sure that my sister, brother or I would have the same work ethic if it wasn’t for the way my parents raised us. They helped develop the integrity that guides us in the right direction. It’s what drives me in doing the ‘right thing for our colleagues,’” she said.