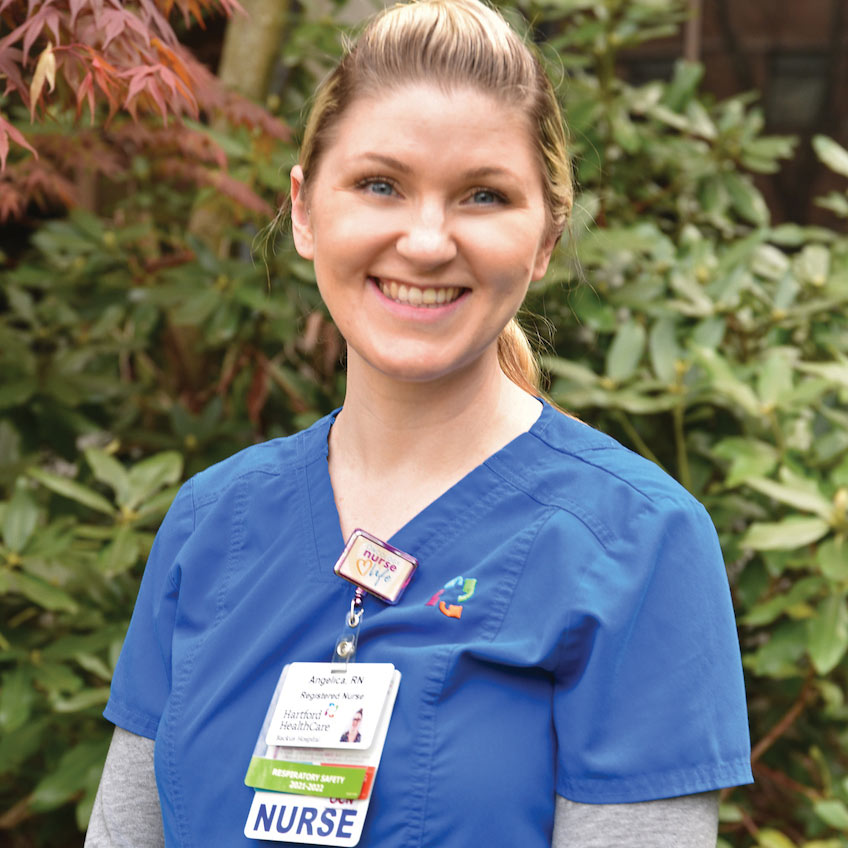 At Backus Hospital, the volunteer program could easily be mistaken for a farm team of sorts.

Just as baseball has minor league teams training players so they can move up to the Bigs, so too does the Backus junior volunteer program have a reputation for creating medical professionals.

Tyler Fitzgerald was a student at UConn in 2017, studying physiology and neurobiology with an eye toward medical school when he contacted Mary Brown, volunteer and guest services director at Backus, to get involved.

“I always knew I wanted to do something in the healthcare field,” Blackburn said, adding her father’s death from cancer gave her personal experience with illness. “Getting to know his hospice nurses, I couldn’t see myself doing anything else.”

Delivering food trays and helping with patient discharges put her in close contact with lots of nurses. During college, she worked as Brown’s junior volunteer coordinator and, after college,

“I didn’t really picture myself coming back to Backus, but that’s what I did. And, I didn’t think I wanted to be in oncology but the universe worked it out that way.”

Fitzgerald started volunteering as a patient representative in the Emergency Department, going from patient to patient to offer help, blankets, pillows, beverages or food. In 2020, he was hired part time as a patient sitter, staying at the bedside of a patient who needs oversight, either because they are a fall risk, undergoing detox from substance abuse, or attempted self-harm or suicide.

He now works as a mental health worker at Backus, but heads to UConn’s School of Medicine this fall, interested in endocrinology, psychology, neurology, maybe even primary care.

“I remember during his (volunteer) interview he expressed a desire and determination to attend medical school and we are so proud that his dream has been realized!” Brown said. 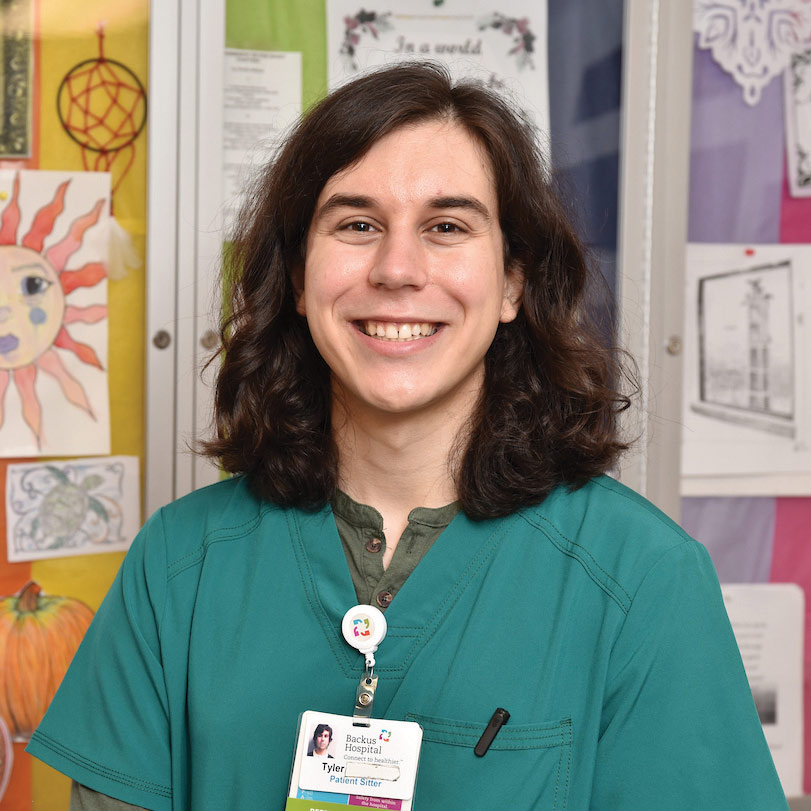 Dressed head to toe in vintage white nursing uniforms, accented by blue and red capes, one small group of women literally stand out in a crowd.

The women are part of the Connecticut Nurses Honor Guard, active and retired nurses who voluntarily honor other nurses by attending their funerals or memorial services and presenting a tribute to those in attendance.

As part of efforts to form nurses honor guards in all 50 states, Athena Mains, Care Connect instructional designer for Hartford HealthCare, was interested in starting a Connecticut chapter.

“As I was thinking about how to do this, two other nurses reached out and the three of us got to work right away to make it happen,” Mains said. The Connecticut chapter officially formed in January 2021 with the motto, “We Take Caring to the Next Level.” They took part in their first tribute that October.

“I never thought in a million years I’d be 50 years old attending funerals so often, but it’s been such a rewarding and humbling experience to honor the women and men who’ve dedicated their lives to a profession that’s held in such high regard,” Mains said.

Wearing outfits resembling Florence Nightingale, the founder of modern nursing, the Honor Guard actively participates in funeral services, presenting the family with a white rose and a nightingale lamp as a keepsake. They also read a poem that symbolically releases the nurse from duties.

“It’s a beautiful thing to do for the nurse who’s passed, but it’s also wonderful for the family because it validates the role that nurses play in the lives of their patients during the course of their career,” Mains said.

The Connecticut Nurses Honor Guard has about 20 active members and they hope to grow numbers across the state to help accommodate funerals since the majority of current members live and work in central Connecticut.

We need all kinds of members. The only requirement is that you have to be a nurse who is actively working, retired or even a student,” Mains explained. The group is also looking for ways to fundraise to help pay for the items given to families.

“We’re proud of what we’ve been able to accomplish so far and the impact it’s had on so many people. It’s a meaningful way to pay tribute to our nurses who are so deserving of this type of recognition.” Mains said.

For more information about the Connecticut Nurses Honor Guard, or to become a member, contact Athena Mains at Athena.Mains@hhchealth.org. 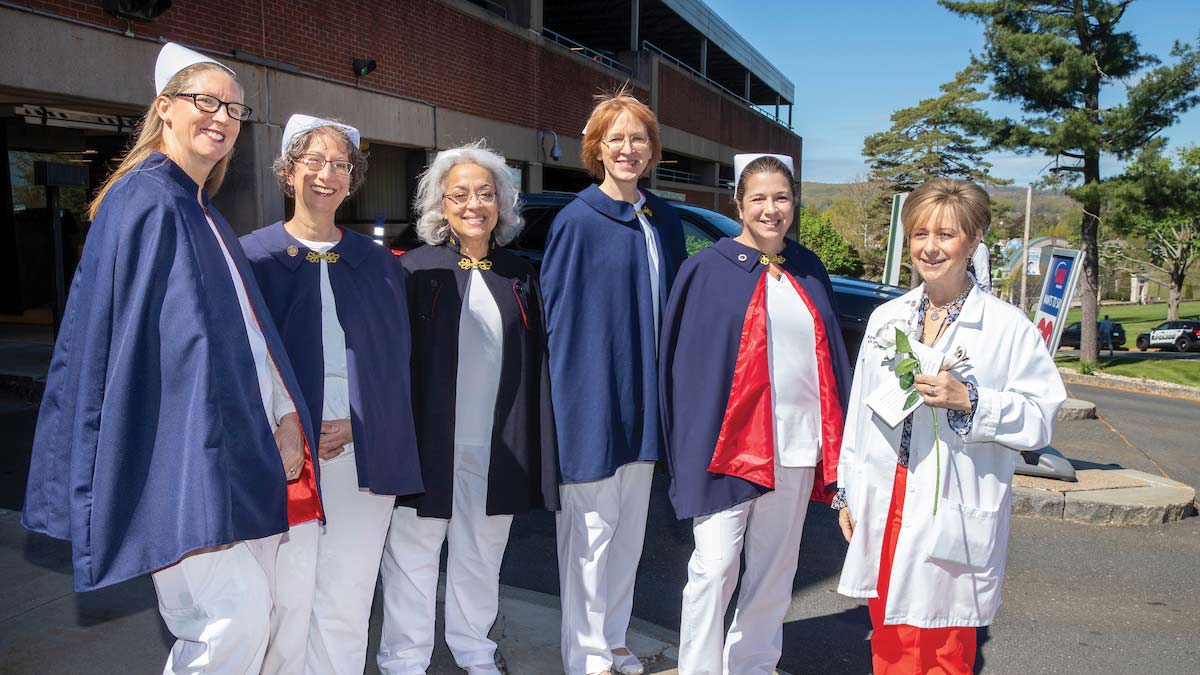 Every day, our colleagues do amazing things to benefit patients and the community. Email your moments that matter to susan.mcdonald@hhchealth.org.