Run 5K for the Purple Light

Contact Erica Moura at Erica.Moura@hhchealth.org for more information, to volunteer or donate.

“Health inequity is a reality,” Dr. de Marcaida said. “We have a moral obligation to recognize and address health inequity towards our historically underserved and marginalized communities with the same passion and strength we have shown in bringing the highest standards and innovations in care to all our patients.”

This despite the fact that Parkinson’s is more prevalent in Hispanics than other ethnic populations.

“That told us right away that this was important. We should have been seeing more Hispanic/Latinx patients than we were,” said Shimer, adding they identified three major barriers for this population: language, culture and transportation. “None of our existing centers had a fully integrated Spanish-speaking staff, and none are in urban centers, so public transportation was pretty much nonexistent.”

The planning group decided to open their new program in the Brownstone Clinic at Hartford Hospital, which is fully staffed with native Spanish speakers and located in the center of the city. In October 2020, Dr. Moro-de-Casillas started seeing Spanish-speaking patients there on the first Wednesday of every month. Since opening the clinic, the only one of its kind in New England, more than 100 patients have come in for Parkinson’s disease, Huntington’s disease, essential tremor and other conditions.

Dr. Moro-de-Casillas, a native of Mexico, said, “It’s not just overcoming the language barrier. It’s embracing the patient in a cultural environment where they are comfortable. It’s being in a place where the patient and provider understand each other.”

That was exactly what 70-year-old Carmen Lopez Guzman and her daughter, Dorymar Perez, needed. After discussing different treatment choices and understanding her options, Guzman chose botulin toxin injections to help control her tremor. The injections have left her feeling “a lot better,” she told her doctor.

“She understands me very well,” Guzman said. “I can communicate with her, instead of having to have my daughter translate everything for me.”

As the patient roster grows, the hope is to expand the clinic to more days, Shimer said. The fact that it was less than a year from concept to reality, she said, makes this project “a best practice example of what we can do. It was not without its hurdles but it really resonated with people and we were able to make our case with data and facts. This is really revolutionary. Dr. Moro-de-Casillas is so passionate, she made everyone feel invested.” 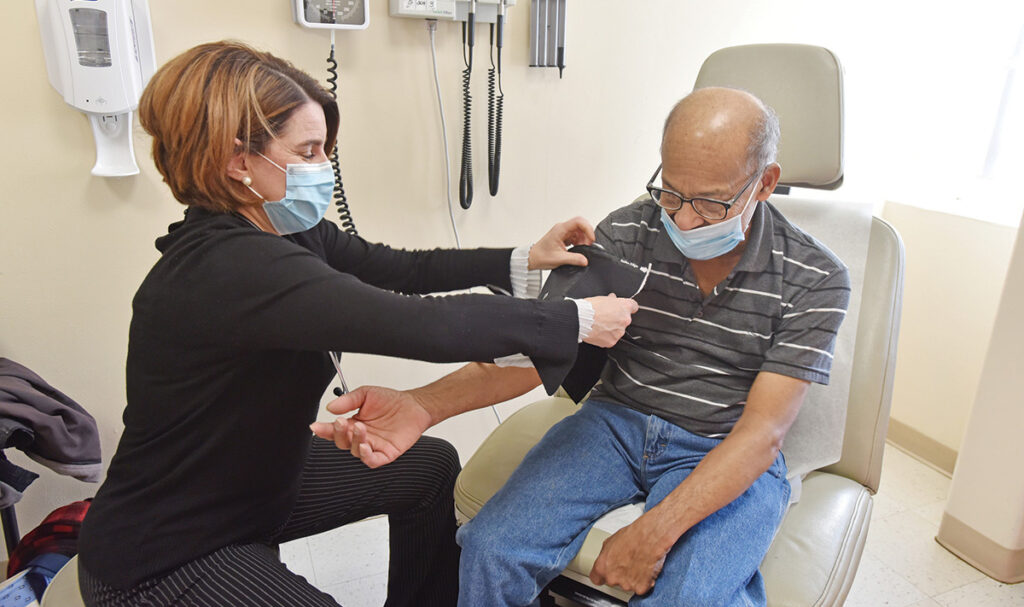 Home-cooked meals can be a comfort or necessity, but some find it overwhelming to shop and prepare the food.

Erica Moura, director of human-centered care at the BHN, said the project funds the purchase of dignity items such as wigs, clothing, multi-cultural hygiene products, blankets and creative therapy objects. Donations also helped a woman get her car back when it was impounded while she was in the emergency department.

Moura developed a partnership with My Local Chefs after asking for a donation for a silent auction fundraiser for the Purple Light Project. Owner Vanessa Sena wanted to be more involved.

“The Purple Light Project purchased 600 meals for behavioral health patients in the form of vouchers,” she explained. “There really is a ton of potential to be humanistic in our care.”

My Local Chefs brings together diverse chefs and farmers from around the state. Chefs create menus and Sena’s team handles the website, facilitating orders and delivery of meals and food boxes.

“We talked about a budget and I worked with my chefs to get different menu items to fit within the budget, while including healthy proteins and vegetables,” Sena said. “We want these to be nutrient-dense meals.”

Many chefs wanted to be a part of the project, so menus were created specifically for the Purple Light Project. Clients get a voucher for three meals and can pick items they like from a limited menu. One delivery is included to anywhere in the state, including shelters.

“Seeing how Erica cares about her patients and their recovery made me want to get involved,” Sena said. “I have had family members who have been hospitalized. I know it can be hard to cook for yourself. Being able to offer healthy meals for a few days to help people get back on their feet is amazing.”

For eight years, Kevin Jones lived with terribly swollen legs and pain, in and out of doctors’ offices, urgent care clinics and hospitals, and on and off antibiotics.

The 62-year-old owner of a Storrs metal fabrication business, Jones was ready to give up. Bouts of cellulitis grew more severe and frequent, and it seemed no one could help.

An old football injury exacerbated by a 2013 accident started the roller coaster of swelling, pain and medical visits. The initial diagnosis was a blood clot that badly damaged a vein in his right leg, causing fluid to build up repeatedly in both legs.

“No one could get the fluid down,” he said. “It was not controllable. Then, the cellulitis started and kept coming back. A couple of times, I was almost septic.”

Cellulitis is a common bacterial skin infection causing redness, swelling and pain. If untreated, it can spread and cause serious health problems.

Frustrated, Jones told his primary care doctor, Dr. William Spector, “I want the best vascular surgeon there is, even though I had already been to several vascular surgeons. He sent me to Patty.”

Bozeman diagnosed Jones with lymphedema, the build-up of fluid in soft body tissues when the lymph system is damaged or blocked, and referred him for lymphedema therapy.

At home, he used special socks and a pneumatic pumping device for which he wore special garments on both legs and his torso. Hooked to the pump, the garments inflated and deflated, making his lower body feel like it was in a blood pressure cuff.

Using the equipment five to seven days a week for about an hour, Jones’ legs — and life — have returned to normal.

“As a former athlete and a runner, to not be able to do anything, well, you will do anything to make it right,” he said. “This has been a game-changer for me. I haven’t felt this good in eight years.” 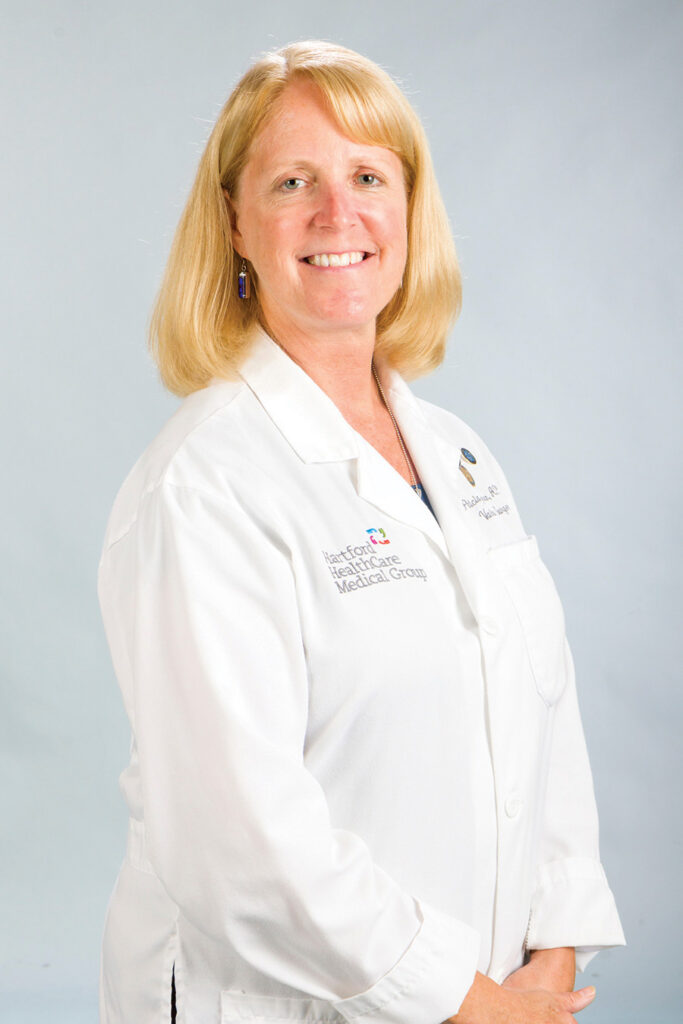 As the CampusCare program brings behavioral health services onto more local college campuses, it became imperative to have a clinician leading the way.

Filling the new role of regional director of collegiate counseling for the Hartford area will be Ralph Dodd, PsyD, a long-time clinician at the Institute of Living.

“We are very happy to have an internal candidate with as much expertise, experience and enthusiasm as Dr. Dodd. He has been an invaluable asset at the IOL for 20 years and he will help us strengthen and grow our impact through CampusCare,” said Dr. James O’Dea, senior vice president of the Behavioral Health Network.

Dr. Dodd, a Newington resident, had been clinical coordinator at all three locations of the Grace Webb School, where he supervised treatment providers and provided direct support. In addition, he is a major in the Connecticut Army National

Guard, serving as one of two clinical psychologists in the state and conducting behavioral health screenings as part of soldiers’ annual physicals, pre- and post-deployment assessments and fit-for-duty evaluations. He is also an adjunct professor at Central Connecticut State University and the University of Hartford.

Dr. Dodd earned his doctorate from the University of Hartford and completed an internship and post-doctoral fellowship in health psychology, both at the IOL.

In his new role, he oversees collegiate counseling provided at the universities partnered with Hartford HealthCare through CampusCare, including Quinnipiac University, Trinity College, University of St. Joseph and Connecticut College.

“I enjoy the work I do. I enjoy working with people and the human aspect. I am excited about this role and enthusiastic for the potential that this position has,” Dr. Dodd said.

CampusCare professionals oversee the Student Health Services on each campus and help coordinate additional services within Hartford HealthCare when needed. Behavioral health counseling, according to Dr. O’Dea, is more critical than ever on college campuses where students can struggle with social, emotional and academic demands.

“Dr. Dodd will supervise the clinical counseling offered on campuses, filling a great need among the students,” he said, adding that Dr. Dodd’s appointment is a major step toward establishing a Center of Excellence for Collegiate Counseling at the BHN. 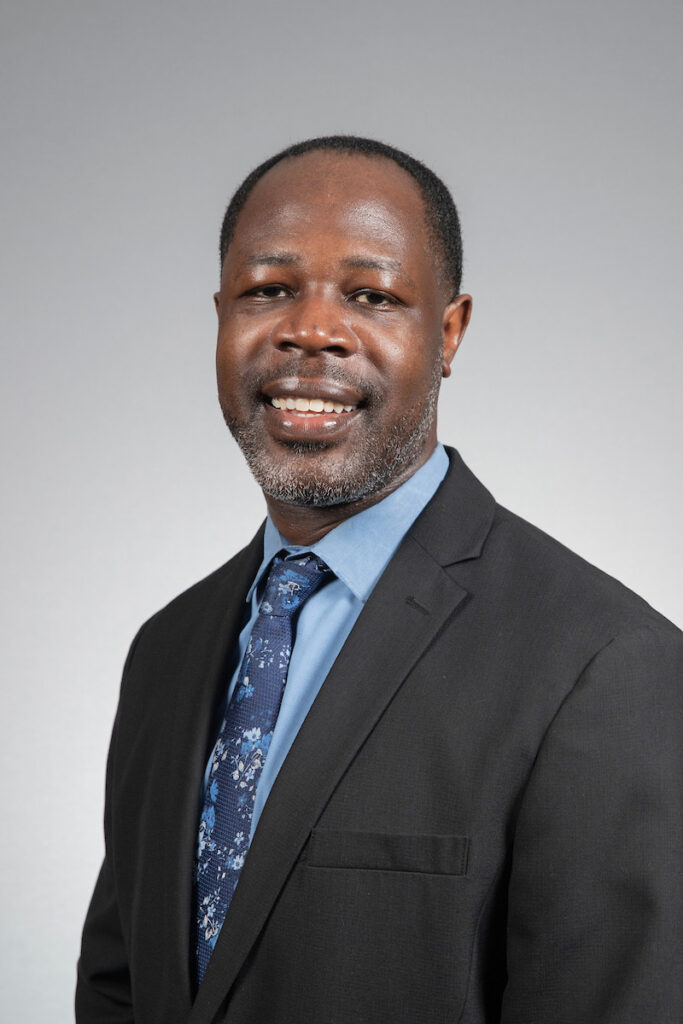 When it comes to learning the latest in medical technology and reporting, members of Torrington Fire Department have a friend in Charlotte Hungerford Hospital Emergency Medical Services (EMS) Coordinator and Paramedic Trish Wain.

Firefighters look forward to monthly training sessions with Trish and members of the CHH Paramedic Intercept Service because it’s a unique opportunity to learn and practice the latest techniques to save lives every day.

“Spending time with our local first responders is very rewarding because we are able to train together and share expertise and experiences when it comes to emergency care,” Wain said.

In one session, she reviewed the basics of the new Contour blood glucose monitor, an effective tool with patients who are known diabetics, unresponsive, suspected stroke or with altered mental status. The training involved understanding signs and symptoms of high and low blood sugar, and practicing use and maintenance of the monitors.

“The use of finger stick blood glucose monitoring by first responders enables them to rapidly recognize this complication in an unconscious person with diabetes and administer lifesaving glucose,” said CHH Endocrinologist Dr. Egils Bogdanovics.

“The CHH paramedic team helps us enhance our skill sets so we can better respond to the needs of the people we serve. This has had a great impact on the community and is paying huge dividends for all involved,” said Assistant Fire Chief Robert J. Shopey. “(They) are always so helpful and available when we need them. I cannot say enough about the training they provide as our community partner and the positive effect it has on our patient care at the scene of an emergency.”