Anyone spending any time at Charlotte Hungerford Hospital in the last 46 years most likely ran into Judy Baldwin‚ either giving directions or helping find a document or office — and it was always with a smile, because she has a lot of those to go around.

A humble Baldwin retired at the end of August, as happy and content on her last day as she was on her first, and excited for her next chapter. She’s something of an expert at change, among many other things.

An administrative associate, Baldwin was happiest and most productive helping people, projects and systems run efficiently, following the prediction in her sixth-grade autobiography, when she pronounced she wanted to “help people do their job.” To do that, she earned a degree in medical assisting, and a bachelor’s in office administration with a minor in human services.

Hired by CHH in 1975 to do medical transcription for radiology with a state-of-the-art Dictaphone, Baldwin recalled her excitement when she the hospital bought electronic typewriters. She mastered the machines and became a reliable resource for just about everything.

That helpfulness and ability to evolve with technology continued when, by 1985, word processors and saving data to floppy disks came along. Voice recognition was introduced, and Baldwin helped with that and many other new technologies, including Meditech for patient records. She would use that until it was replaced with EPIC in 2018. She lived through the digitalizing of X-ray films and the introduction of ultrasound, PET scans, MRI, mammography, and interventional radiology.

For decades, Baldwin was to go-to person for data and volume statistics. She was always steady and calm during times of change, rapid growth, economic downturns and even chaos. Through it all, she claimed she never wanted to be anywhere else.

“I’ve been able to do what I love for so long. My best is all I could give and I’ve tried to do that. I’ve survived a lot of change because I adjusted my sails to the way the wind was blowing and my faith took it from there,” Baldwin said, adding that the people at CHH were always her favorite part of her job. “All along my hospital journey, wonderful people I needed were placed along my path.”

While Hartford HealthCare’s holiday television commercial lingers on screens for just 30 or 60 seconds, it took weeks to coordinate, create and distill the brand into a moving story.

“These continue to elevate and tell our Hartford HealthCare story,” noted Reem Nouh, senior vice president of healthcare marketing at Adams & Knight, HHC’s agency partner. “Big national brands use holiday messages to connect with people, and we thought Hartford HealthCare could do the same.”

The first holiday ad, focused on mask wearing, came in 2020, during the second COVID-19 wave, said Helayne Lightstone, HHC’s senior director of marketing and branding. This year, she said the goal was to reinforce the importance of vaccination against the virus and how it helps people gather safely.

• Drafting a script. This ad has no words, but all movement in the story must be outlined.

• Determining location. A location scout finds the perfect setting. In this case, it was a regular ranch home in Connecticut.

• Casting actors. To resonate with the least vaccinated population, the team enlisted Hispanic actors to play a mother and son reuniting after he is vaccinated.

• Creating a storyboard. This visually relays each commercial frame as a planning tool, often prompting ideas such as renting a snow machine to give this commercial a wintery feel.

On the shoot date, the team descended on the location and created a mini movie set, careful not to disrupt the neighborhood. The crew included a director and experts in lights, wardrobe and makeup, plus camera and audio operators. Nouh and Lightstone were on sight monitoring the shoot.

Sometimes, last-minute changes are made when an idea strikes. HHC commercials typically end with the logo against a white background, but when Lightstone saw the snow, she suggested ending with the logo in the dark as snow fell.

“We don’t want to hit people over the head with our brand, so we find ways to incorporate brand cues, like a logo on the vaccine card. Authenticity is important,” Nouh said.

In commercials with clinical settings, Lightstone said the team invites providers on set.

“We want the message to be credible, like making sure everyone is gloved for universal precautions,” she explained. “We don’t want our carefully thought-out production to fall on something that’s not credible.”

Once produced and airing on TV, the marketing team maximizes the investment by rolling ads out on HHC’s social media platforms, digital screens across the system and in community locations, and as web ads.

“You have 30 seconds to tell a really strong story. Emotion resonates because that’s how people connect. If it generates feeling, you’ve established a connection with the brand,” Lightstone said. 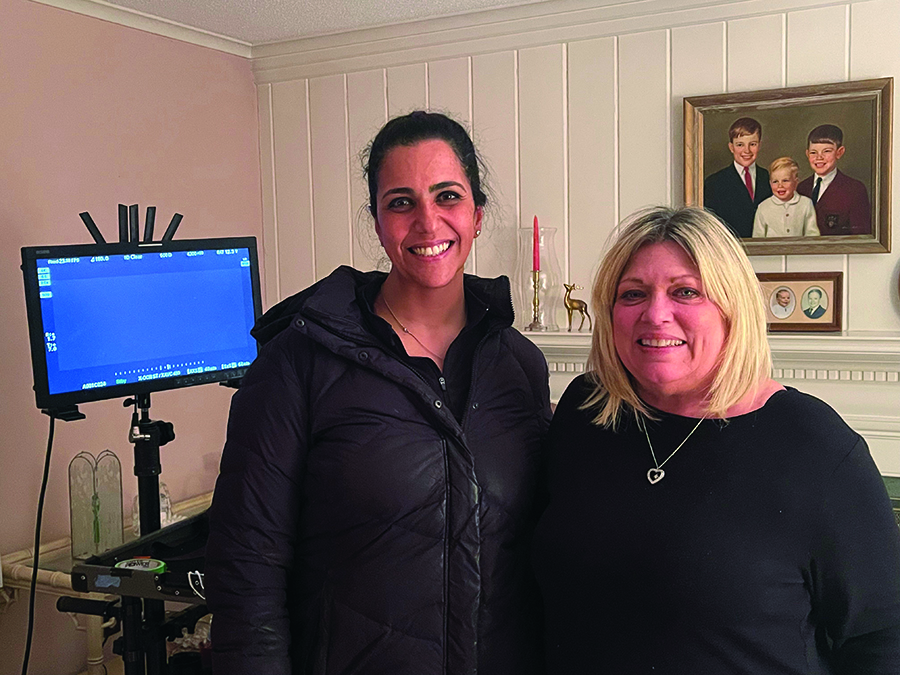 Reem Nouh and Helayne Lightstone, at right, lead the creative team behind Hartford HealthCare commercials, including the holiday one shot in November.