A Flood of Bad Memories, But Hope for the Future 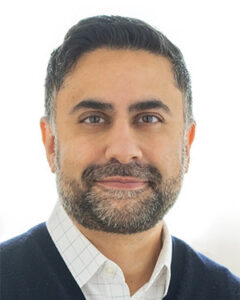 When Dr. Javeed Sukhera first heard news of May’s mass shooting in Buffalo, it shook him to the core; he has experienced this kind of violence on a personal level.

Less than a year ago, a hate-motivated attack in Ontario, where Dr. Sukhera lived, killed four Muslims and severely injured a young boy. All were family friends. The connections between the Buffalo and Ontario incidents were stark.

In Buffalo, the gunman was 18 years old. In Ontario, the suspect was 20. Both allegedly subscribed to racist ideologies, and both drove in from out of town, seeking victims of a certain race.

In both cases, victims were parents, grand-parents, husbands, wives, outstanding members of the community and innocent humans.

“The Buffalo shooting re-traumatized me. I couldn’t sleep, there’s a lot of numbness, a lot of compartmentalization. But it’s very important that we acknowledge it and talk about it,” he said.

The Buffalo shooting occurred when Dr. Sukhera was on call at the IOL. During the usual shift change check-in, no one mentioned the massacre so he did, ending with: “I just want to say that I’m struggling with what happened and I hope to send love to whoever might also be struggling.”

Talking about these things, he said, is important. He hopes others across Hartford HealthCare feel free to identify racism and stereotyping when they see it. Highlighting racism is especially important in healthcare, where people from many backgrounds come together to help people.

Unfortunately, racist incidents against providers is also increasing and he said there needs to be recognition and redress at those moments and colleagues need to know they are supported.

This helps with healing and keeping the issue alive so things can change.

“We can’t pretend it didn’t happen,” Dr. Sukhera said. “We have to heal. That’s what communities and organizations do. We have to talk about being authentic.

No one should be afraid to go to the supermarket or to be ourselves, to live our lives. At the same time, we have to fight as hard as we can so no one has to ever experience this again.”

The Buffalo supermarket gunman subscribed to the “great replacement theory,” a racist ideology suggesting there is a plot to reduce the influence of white people.

Some may believe these hate-ridden diatribes exist in the dark reaches of the internet, experts say that’s no longer the case.

“These views are not just within the fringes,” said Dr. Javeed Sukhera, psychiatrist-in-chief at the Institute of Living and Hartford Hospital’s chair of psychiatry. “There is a mainstream belief that some members of our communities should not be in America, and there are mainstream voices that peddle these kinds of ideas. Division and hatred sell. They appeal to people, especially people experiencing pain. History is rife with examples of this.”

In a rambling 180-page manifesto posted days before the rampage, the 18-year-old shooter included ideas from the “great replacement theory.” This includes beliefs that white people are being replaced by non-white immigrants and low birth rates in a plan masterminded by Jewish people. At the deadly Charlottesville march in 2019, people chanted, “You will not replace us!” and “Jews will not replace us!”

Dr. Paul Weigle, associate medical director at Natchaug Hospital, chair of the Media Committee for the American Academy of Child & Adolescent Psychiatry, and a member of the scientific advisory board for Children & Screens: Institute for Digital Media and Child Development, said research indicates recent increases in bias in youth based on ethnicity, race and gender.

Teens surveyed reported that bias is increasingly a reason for bullying and cyberbullying. Anti-Asian and Anti-Muslim assaults have also been on the rise. The Southern Poverty Law Center, Dr. Weigle added, tracks more than 700 hate groups across the United States.

“There is discourse out there that is demonizing us rather than humanizing us,” Dr. Sukhera said.

What can be done?

“We have to talk about it,” Dr. Sukhera said. “We can’t pretend like it didn’t happen. There is a tendency to do that with gun violence and racist crimes. That’s retraumatizing for people and communities to just go on like nothing ever happened. We need to name the problem, look in the mirror and make sure people who foster and perpetuate demonizing narratives and stereotypes are held accountable.”