Behind the Scenes: Hotline veterans

Hotline veterans reflect on life in the foxhole

They haven’t been to war, but after the Hartford HealthCare Community Care Center (CCC) closed May 21, leaders of our rapid-response COVID-19 hotline said they may better understand how soldiers sometimes feel when returning home from battle.

They’re happy to be returning to normal, but the adrenaline rush, camaraderie and feeling like a team united against a common enemy — well, that’s just hard to leave behind.

In the aftermath of COVID-19, they said there are moments when it feels almost like the pandemic never happened, like the 24/7 rush to help a terrified nation understand this new viral threat was just a dream. Other times, they are eager to process the 14 months that consumed their lives.

On March 5, 2020, Beth Ciotti, Kathleen Race and Dr. Daniel Kombert were doing their jobs leading our Care Logistics Center, including overseeing the Newington command center, where nurses and others monitor and regulate patient flow in, out and through HHC’s acute-care hospitals.

A transport crew might need to wheel a MidState patient to the CT scanner. A stroke patient in Backus’ emergency room might need to be transferred to Hartford Hospital. An elderly patient with a severe respiratory infection might be admitted to The Hospital of Central Connecticut ICU.

It’s important work, stressful at times. But, nothing like the frenzy of a global pandemic that would soon envelop them.

By March 6, 2020, it was no longer a question of whether a patient with COVID-19 would turn up in Connecticut, but when. The Care Logistics Center phones started ringing off the hook — emergency room staff asking what to do if a patient arrived with COVID-19 symptoms; a surgeon wanted to know if he should proceed with the operation; a primary care provider left a patient with suspicious symptoms in an exam room to call for guidance.

Card tables, a notepad and phone

Responding to the need for information, Ciotti, Race and Dr. Kombert hastily set up a few tables in an empty conference room, plugged in phones and started answering questions as best they could. Care Logistics Center staff worked overtime to help.

By March 7, 2020, HHC publicly announced the opening of a 24/7 hotline called the COVID-19 Clinical Command Center (CCC). A bed was set up in Ciotti’s office so a doctor could be on call overnight. Almost 100 calls came in the day the center officially opened.

“When you Googled COVID and hotline, our number and the CDC came up and the CDC didn’t have anyone answering phones,” Ciotti said, referring to the federal Centers for Disease Control and Prevention.

During the first week, almost 16,000 calls came into the phone bank, which was still largely staffed by Ciotti, Race and Dr. Kombert, on 16-hour shifts, seven days a week. By the time the hotline closed, it would handle more than 600,000 calls.

“We didn’t interview people,” Ciotti said. “We had people come in, get oriented for 10 minutes and never want to leave. We were fighting a common enemy, and that enemy was COVID-19.”

The center that started with six tables, phones, pads and paper ended up with 23 tables, each equipped with a computer and phone, to answer calls around the clock.

“We told everyone who worked at the CCC, you made a difference. You may not have been at the patient’s bedside, but you made a huge difference in the lives of hundreds of thousands of people,” Dr. Kombert said. “That’s pretty impressive.”

When COVID-19 was still very much a mystery, the CCC became a sentinel, helping epidemiologists and infectious disease specialists identify symptoms that could diagnose the virus even before test results came back.

The CCC was among the first to notice many patients with suspected COVID-19 reported a loss of taste and smell, Race said. It’s become a tell-tale sign of infection but, before then, doctors were looking mostly for cough and shortness of breath.

By March 16, HHC opened its first drive-up COVID-19 testing center and the CCC’s name changed to Community Care Center. Over the course of the next 14 months, the CCC team would be responsible for scheduling testing appointments, providing colleague health and wellness advice, and offering behavioral health support and referrals to an exhausted public.

The room is empty and quiet now. The team returned to their desk jobs, pretty much back to ensuring our patients are moved around the system seamlessly to get the right care in the right place at the right time.

But, get them together in the old quiet space and war stories tumble out. Remember when we crashed the system? Remember the boxes of Gatorade and food? It’s like yesterday, and as we take off our masks and prepare for more normal times ahead, it’s almost hard to process what happened.

Ciotti shook her head. “We were basically in the foxhole together.” 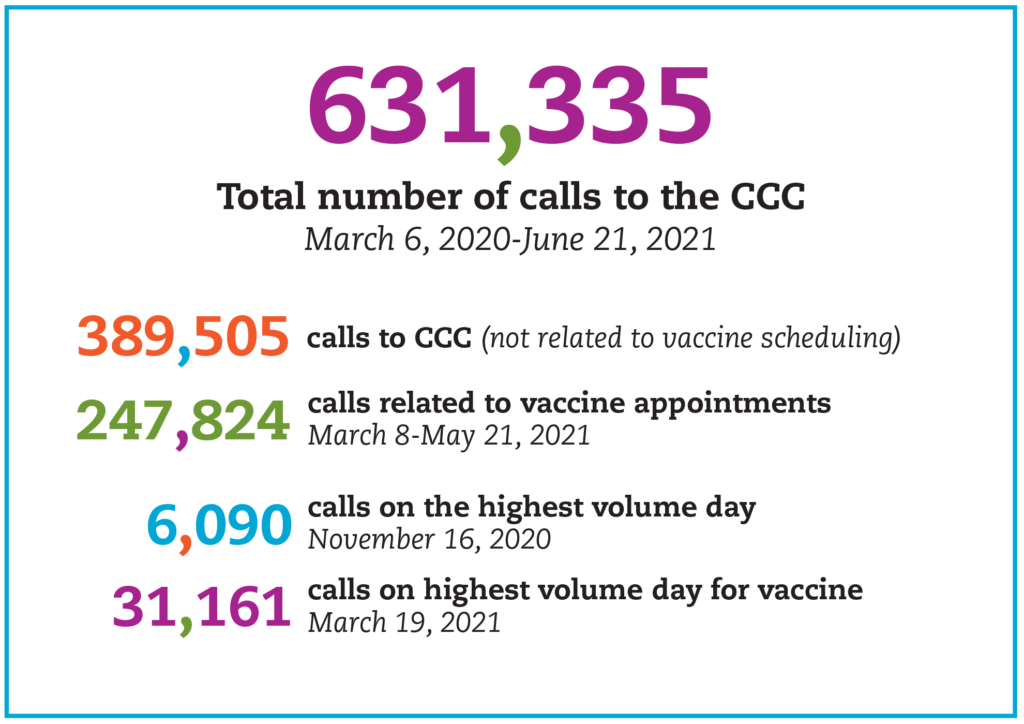