Marlo Toce has worked in Hartford HealthCare Health Information Management (HIM) for 36 years, starting as a teenager when the department was called Medical Records and was located on the main floor of the Bliss Wing at Hartford Hospital. She’s currently an HIM analyst. Repurposing old furniture and items is a hobby that helps redecorate her home and brings her joy.

What is your hobby and why did you start doing it?

My hobby is refinishing and up-scaling old furniture. I started doing this because the home I was living in was part of the historic era. I wanted the furniture to fit with the age of the home in a fashion sense. I can’t say it wasn’t stress-free, but it did give me peace of mind.

What is your favorite piece so far and why?

My favorite piece is the Louis Vuitton trunk I turned into a coffee table. I loved it so much that I made one for both of my kids. It’s a timeless piece that is hard to find and afford. I bought the material from Etsy.

Where do you find pieces to repurpose and how do you come up with the ideas?

The pieces of furniture I have redone were found curbside or have been given to me by friends and family. My ideas come from magazine cuttings I have saved over the years and also from Pinterest.

Do you sell your items or gift them to people and keep some yourself?

I have gifted many of my projects to my family and friends. I like to see them when I visit their homes. I’ve only kept a few pieces for me that I could not part with.

What’s your favorite part about this hobby?

My favorite part is seeing the end piece and being in shock that I actually made it.

Laurie Strand, APRN, works in the Cardiac ICU at Hartford Hospital, where life can be intense  and invigorating at the same time. Outside of work, she enjoys the adrenalin rush of flying over Connecticut and beyond, having a held a pilot’s license for 30 years. It’s a hobby she shares with her daughter, Arianna. Last winter, the two had the flight adventure of their lives when a wayward pelican wound up in Connecticut and needed safe transport back to warmer climes.

A pelican? How did this adventure begin?

On January 28, a brown pelican was discovered in a cove on the Connecticut River in Essex, far north of its natural habitat. Suffering from pneumonia and frostbite, the bird was rehabilitated at A Place Called Hope in Killingworth and plans were made to transport it to Busch Wildlife Sanctuary in Jupiter, Florida.

We were selected among a field of several volunteer pilots. Soon, Arianna and I were packing up and flying the pelican to Florida — our longest journey to date.

What was the mode of transportation?

I am part owner in an RV-12, an aircraft built by a group of high school students at Wilcox Technical High School in Meriden. Arianna and I named the pelican “Arvy,” which is a nod to the plane that would bring it back home.

Cargo space in the plane is limited to 50 pounds, so other than Arvy, we were only able to pack a change of clothes and toothbrushes.

How did the trip go?

The weather on the journey south complied for us. We made three stops for fuel in Chesapeake, Virginia; North Myrtle Beach, South Carolina; and Amelia Island, Florida, before touching down at North Palm Beach County Airport. In all, the trip was just more than 10 hours in-flight time.

Arvy handled the flight well and, upon landing, was on its way to the Busch Wildlife Sanctuary.

Your adventure continued, though, didn’t it?

Yes! We ultimately had to fly home on a commercial airliner after the forecast prevented us from piloting our own plane back. We later traveled back to Florida to retrieve the plane.

Arvy, who we found out was a female, has settled in nicely at the sanctuary. After multiple surgeries on her frostbitten feet, they determined she cannot return to the wild. She will live out her days at Busch Wildlife, where she is enjoying the attention from being the little pelican who wound up in Connecticut and hitched a ride with a nurse from Hartford Hospital! 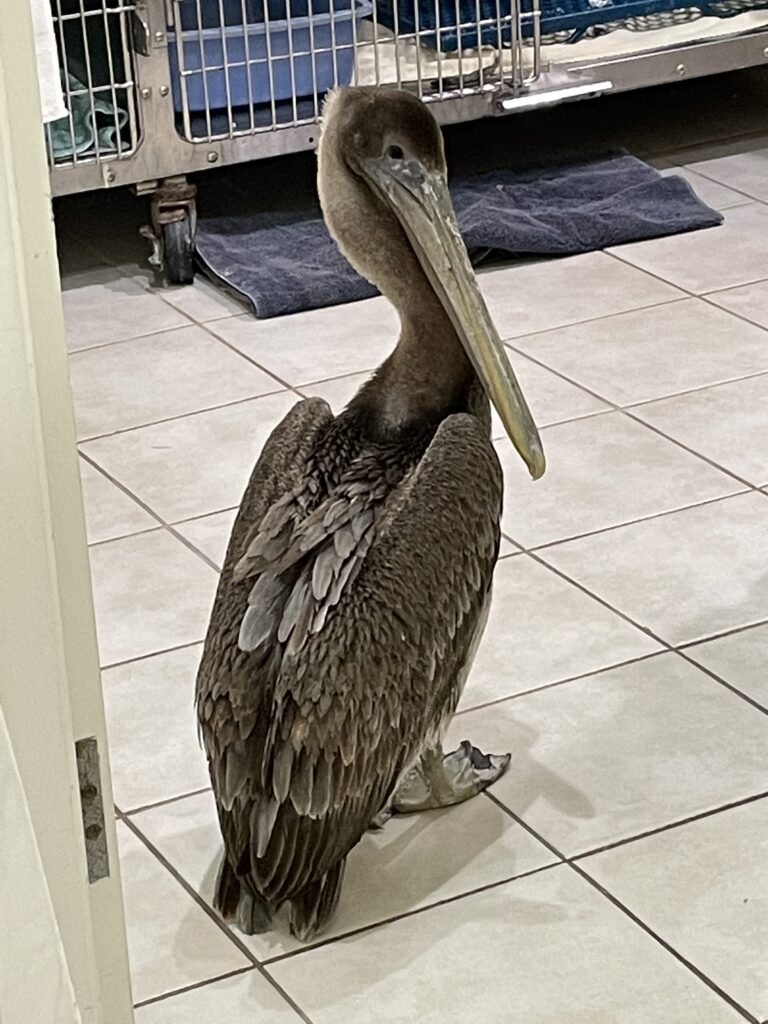 When this brown pelican (Arvy) found its way too far north in January, Laurie Strand and her daughter Arianna flew him back to Florida.

Sean Halloran, MBA, is the ePro/PO lead with the Hartford HealthCare Supply Chain Management team. As such, he helps support colleagues across the system with their material and service needs. In his spare time, he rolls up his sleeves and turns on the power tools in his workshop where he creates one-of-a-kind pieces of furniture.

How long have you been building furniture and what inspired you to start?

I started about 10 years ago with small woodworking projects and that evolved into larger pieces that took functional roles within the house. I had developed a skillset building impromptu fixtures or displays at my job which led to a desire to progress to pieces that I could enjoy or share with friends and family.

How did you learn the craft?

My father was a carpenter during the years he worked to put himself through school and so there were always projects growing up where I assisted. My grandfather was a pediatrician but kept a pretty impressive workshop that I used to love playing in as a child. I also learned skills and knowledge from YouTube and other social media outlets where I found detailed resources readily available.

What are some of your favorite things about furniture building?

I find it to be extremely relaxing. When you build things yourself, you have the opportunity to come up with an idea, whether it’s something you’ve seen before or a combination of inspiration and ingenuity, and then make it a reality.

What type of furniture do you build and why?

I have many interests and have done Shaker-style pieces, pyrography (wood burning) and modern/ modern-industrial pieces. One of the most recent projects I completed was a six-foot live slab bar top table to finish off a room renovation that included a barn wood wall. I’ve sold a few pieces over the years, but now that I’m done with grad school and have some more free time, I’d like to spend more time working on the craft.

What advice would you give others interested in this craft?

Start small and focus on fundamentals as it’s important to learn the basics. Understanding joinery, wood carving, measuring and the use of hand tools ensures that, once you start taking on larger projects and incorporating power tools into the equation, you will have a solid foundation. These resources will make the job easier, not simply do a better job. Most importantly, have fun!

Hartford HealthCare might be where we work, but when we asked you where you find fun, relaxation or deeper meaning in your lives, we were astonished at the variety of hobbies and activities you pursue in your spare time. Here are a few of those stories, and we’ll have more in upcoming issues of Moments.